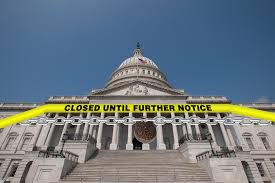 Back in 2013, a shutdown occurred under the Obama Administration where Republicans were fighting really intensely against ObamaCare. This would cause the bill that funds the government to expire, and with no new bill being signed before the deadline, the government was forced to shut down.

Trump is refusing to make any negotiations of a new bill without promises to build a wall on the southern border. Adamantly, he refuses to back down and is frustrating both political parties. As the deadline grew closer and closer, no agreement was found. The government would shut down on Trump’s first anniversary of presidency on Friday, January 20. The main issue causing turmoil in both parties is DACA, who Democrats wish to mention in the government budget while Republicans argue they will not talk about immigration until a funding agreement is reached. On Monday, January 23, a new bill giving the government three more weeks was proposed. Both parties voted the new bill in, which lead to the government reopening.

Recently, on Wednesday, February 8, the previously voted funding gap came to a close. This was typically reported as a second shutdown despite no workers being laid off. Senator Rand Paul used various delaying tactics to push the decision closer to midnight, which was the deadline for the second funding gap. However, unlike the last shutdown, this gap was closed overnight when Trump signed the bill, effectively ending all conflict.

If you want a picture to show with your comment, go get a gravatar.