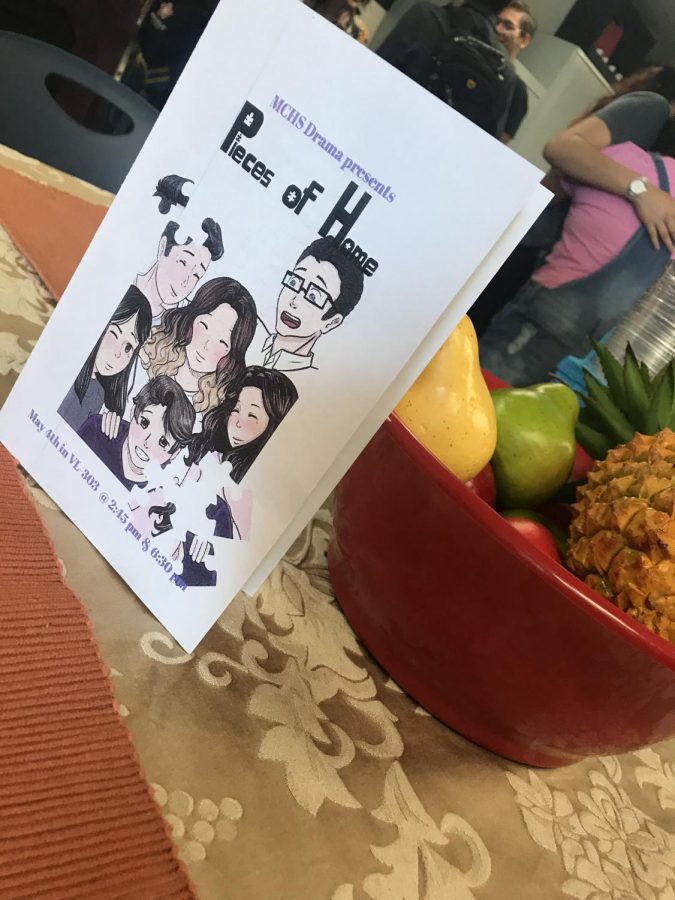 Students could not hold their excitement to watch Advanced Drama’s very first original production: “Pieces of Home”! This was the first show where the actors wrote the very scenes they acted out. The production included seven different scenes that would end up being seven different stories. Having Mrs. Silverstein as a director, Elisa Olivares as the stage/lighting director, and twenty eager actors, the school all collectively wondered how great the production would end up being.

And let me just say this, I loved it!

The minute I entered the room, I could already tell the difference between this production and the previous ones: the formation of the seats. Instead of being seated at tables or being seating in the normal row arrangement, we were all treated to a setup where the chairs surrounded the stage. I initially thought this would hinder the performance, as some audience members would be able to grab a scene in its entirety while others would find themselves staring at the actor’s back, however, the performances involved a lot of moving which kept things clear and interesting.

As for the original stories, I found them to have been masterfully done! I found myself remembering the whole scene by simply reading the title, and that honestly says leagues about the amount of potential our Advanced Drama group has. Every story felt genuine and real! It really made you feel something in your heart. The number of times I heard audience members emote with tiny gasps or little sentences of empathy was incredibly high! Whether it was sadness or empathy from personally connecting to the stories and characters or happiness and excitement from what is to come, I guarantee you left that play with some heavy thoughts. The symbolic touch of the actors being seated among the audience drives home the fact that these stories can happen to anyone. Also, the fact that these stories were left open-ended had me talking about them even after the play was over.

In terms of improvement, the only moment I found awkward was the start of every scene. Actors would be sitting around reading a paper, and sometimes that felt like maybe there was some uncertainty about who would start each scene. This wasn’t too detrimental to the scene, but clearly it made some impact on the audience, who would often laugh in awkwardness. Other than that, all actors were eloquent and loud, and there were little to no problems in terms of sight or audio. Even the stage, despite being simple, was quaint and served its function well.

To piece it all together, this was a play I truly think will leave some regretting not purchasing a ticket. Mrs. Silverstein and her Advanced Drama are making strides of improvement with each subsequent performance. I hope this is a sign for more original productions, as these leave you at the edge of your seat since you have no source material to predict what will happen next.