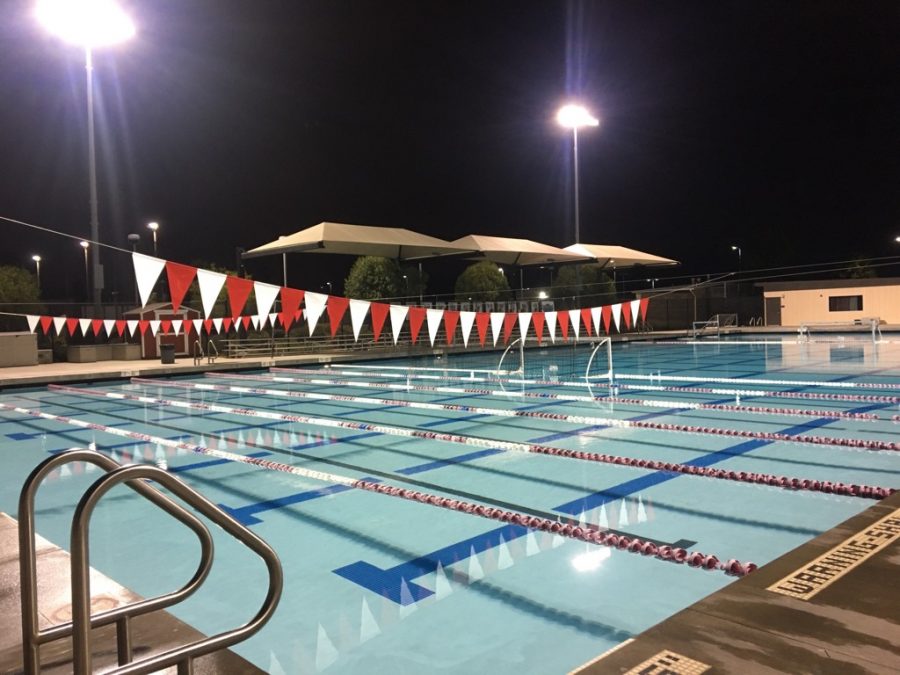 Swimmers! On your marks, get set, *bang* from a starting pistol.

This is the last thing swimmers hear once they’ve dived into the water.

The pressure is immense. Swimmers either feel a terrible pit in their stomachs or are excited to win. For 10 months they have to practice five times a week for two hours and wake up at 5:00 a.m. to go to morning practice twice a week just to win 12 meets. Sometimes being in first place isn’t enough. Sometimes it’s all about being fast if they want to make it to CIF State Swimming and Diving Championships.

“I have to be here every practice and be fully committed. [ Swim ] can be physically and mentally draining,” she said. “ If I slack off and miss a practice or don’t fully try my best, I will never get better. Every day I  push myself to my limits, and try to have a positive mindset during practice because sometimes I want to give up,” said Garcia.

It takes time and 100 failed trials to be able to get at least one good swim stroke out of it. It takes time to build up stamina and a perfect technique of freestyle, butterfly, breaststroke, or backstroke. Giving up isn’t an option when one wants to win and succeed.

Swimmers need to push themselves until they feel sick to their stomachs. It’s the only way they know that they’ve tried their hardest. Even though they feel tired at that moment it just means that they’re improving.

“I think that there are people that don’t view swim as a sport and don’t view it as difficult as other sports. I think part of the reason is that you can’t see the strain, compared to watching athletes on a field or on a track where you can see the strain. You can see them perspiring and how much effort is being put into it. When swimmers are moving in the water, it doesn’t look like they’re doing it right. It doesn’t look difficult and I think that’s part of the challenge. Even a fast runner who looks graceful running. You’re able to see how much they’re sweating. It’s clear that what they’re doing is difficult and how much they have to struggle. I think in swim, [swimmers] don’t make it look difficult and so, in turn, people who don’t really know don’t see [swim] as difficult,” said Silverstein.

The life of a swimmer isn’t seen as difficult. It seems like it took no effort whatsoever to swim 50 yards quickly. However, swimming isn’t as easy as it looks. It’s challenging physically and mentally, just like any other sport with the exception that in Swim you can’t see how much the swimmer has to struggle.

It is heartbreaking when a swimmer doesn’t get first place in their race or how even though they gave it their all it wasn’t enough. They still got last place in every race, even though they went out of their way to train their hardest at practice every single day and never gave up.

However, even though they don’t notice it, their coach knows how much they’re struggling and how much they want to give up. Swimmers feel like they aren’t doing any of the swim strokes correctly or how terrible their form and technique is. But that’s not what their coach sees. They see the improvement every swimmer makes when they didn’t give up.

Segerstrom High School Coach Kourtney Robinson has a motivational speech to give to all swimmers.

“I decided to become a swim coach because I loved seeing the smiling faces of my students when they won a race. How even though they complained about not wanting to get into the water they still came to practice every day and gave it their all and it paid off. Even when they didn’t see it in themselves. I knew that they could do and sometimes I would push them a little to do their best because I knew that they could get their all they need was a little push.” she said, “But I also loved teaching the little [ children ] how to swim. It gave me great joy to know that they learned how to swim and how some of them got over their fear of water,” said Robinson.