Away from college and beyond: Where few dare to tread 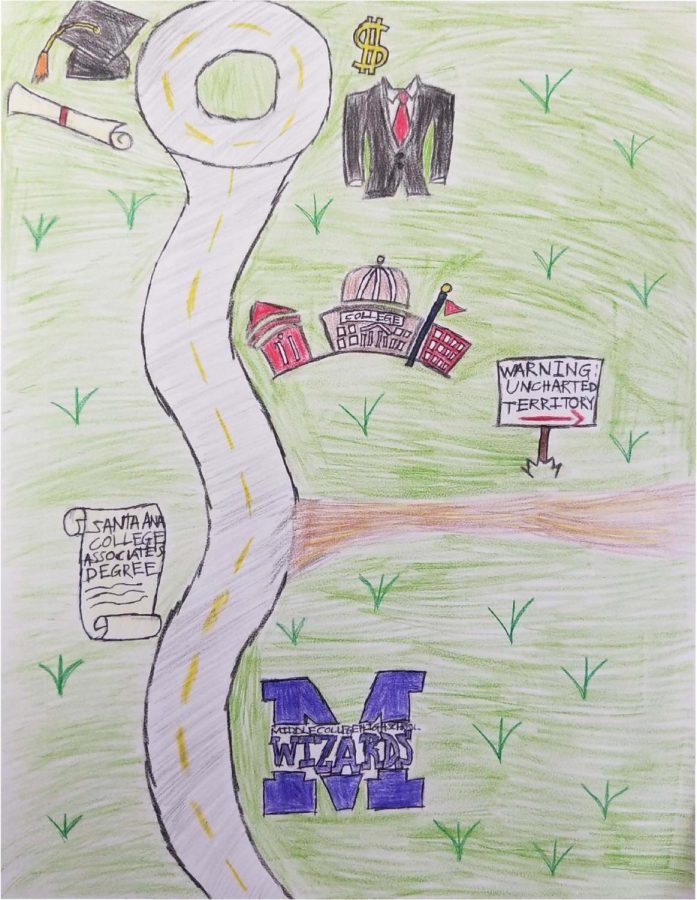 There is a defined road to college, but some students choose to step off of it.

Everyone always said that you had to go to college: your teachers, your parents, your counselors, even some of your friends. But something about college didn’t sit right with you, and as you take more classes and hear words such as “scholarships,” “extracurriculars,” and “units,” the more unsure you are about it.  College may be the well-worn path, but the formula, for whatever reason, won’t work for you, and you know it. This puts you in a bit of a bind because MCHS is all about getting to college. What do you do?

We’re all familiar with the typical Middle College path: go through high school, take all the needed college classes, graduate with an AA degree, go on to a UC or Cal State, get a degree, and then it’s off to the workforce! It’s a formula that works; the thousands of students who have gone down this path are a testament to that. However, this doesn’t mean it works for everyone. Due to either necessity or choice, some MCHS students veer off the road to college.

Some students, because of unfortunate circumstances, are forced to stay at home to attend to personal matters. Jacqueline Negrete, a former MCHS student who is on Independent Study, a program where students can complete their high school requirements off campus, knows this all too well. She started MCHS as a freshman like all of us; however, she struggled with school.

“I was constantly missing school, falling behind, and it was all just too overwhelming for me,” said Negrete.

There were nights where Negrete would get a mere two hours of sleep before having to slog through the next day. Over time, this took a heavy toll on her health. She knew something was wrong.

“I could barely function in high school, so how could I expect myself to be able to function in college?” she said.

On top of this, she had responsibilities at home like taking care of her younger siblings. When you consider both of these factors, it is easy to see how impractical attending college is for Negrete. Sometimes, things that you can’t control hold you down, and unfortunately for her, her health and duties at home are keeping her away from college.

For some others, the trek off the college-bound road was their own decision. Miguel Martinez, a former MCHS student who dropped out to pursue his own aspirations, is one of these people. Initially, Martinez set out to become a physics professor. However, he didn’t enjoy school because he felt that it was moving too slowly.

“I soon realized that I couldn’t do this…for another 6-7 years to get a PhD, no matter how much I loved physics. The way I realized that was by projecting out my life 10 years ahead and realizing that that path would not give me what I wanted out of life,” said Martinez.

For many people like Martinez, the path to college feels too long and restrictive; they would rather explore and forge their own paths without the rules of formal schooling. Martinez is now an aspiring entrepreneur working at a real estate company and is poised to start his own marketing agency this year.

For many of us, however, there may be a more relatable predicament: we simply don’t know what to do with our lives. Though some students have known which field they wanted to major and work in since they were five, others struggle with this decision. They feel that once they pick a major, they are locked into it. This can cause students to put off any commitments when it comes to education because they want to make the right choice.

One of these commitments could include even going to college at all, at least until they make a decision. While this is a noble aspiration, the pressure to major in college can get pretty intense, and students often feel rushed into a choice that could impact the rest of their lives.

For any student, a seed of doubt in a matter as important as your future is scary. The Middle College river moves fast, and if you aren’t careful, you could find yourself in the ocean with no way to navigate it. However, there is help out there.

Velina Espinosa, one of our lovely counselors, advises anyone who is unsure of their future careers to come into her office and talk about your predicament. There are many things that can be done to guide you in the direction you want to go. If, due to unchangeable circumstances, you won’t be able to attend college, the Wellness Center has resources to help.

Espinosa also has an answer for those who intend to skip college to pursue their own ambitions: stay properly informed. The entrepreneur route may seem enticing, but it’s much riskier than going to college. If you’re set on becoming an entrepreneur (or going on any non-college route for that matter), make sure you know what you are doing every step of the way.