What are your pronouns? 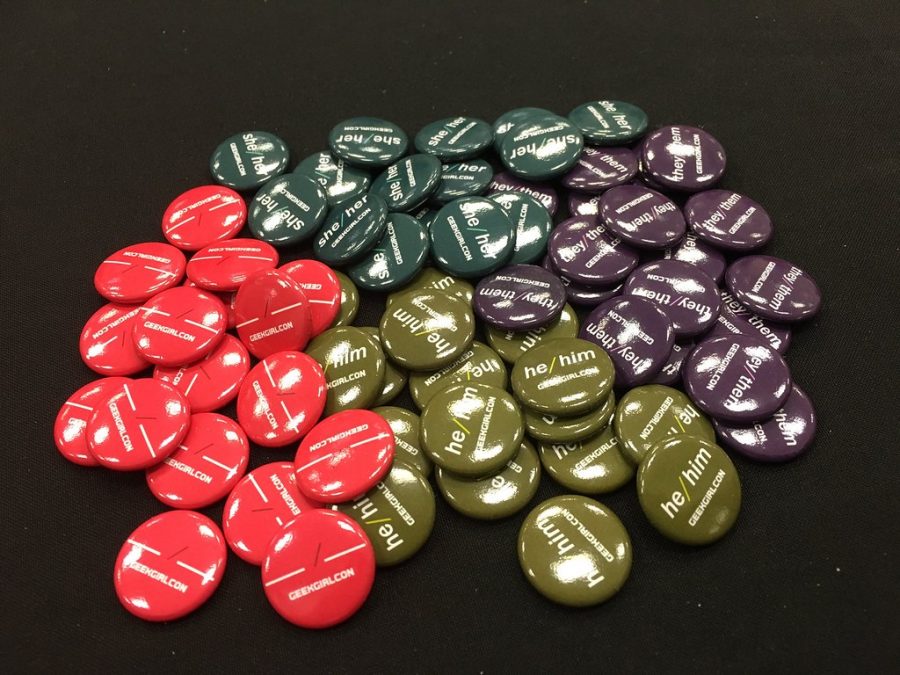 These pins represent pronouns of people so others can know what pronouns they may prefer.

The use of pronouns is becoming a more prominent subject in the LGBTQ+ community. There has been a lot of misgendering recently, especially on social media comment sections.

Social media platforms have begun to see a surge in users putting pronouns in their bios. It seems that over the past few months people have begun to realize that not everyone goes by the most common pronouns of she/her and he/him. Non-binary and genderqueer people appreciate when others use their preferred pronouns or ask before assuming what they go by.

Pronouns are used every single day whether we realize it or not. Assuming one’s pronouns or misgendering is disrespectful and may be harmful to them.

The article mypronouns.org states, “the act of making an assumption (even if correct) sends a potentially harmful message — that people have to look a certain way to demonstrate the gender that they are or are not.”

Pronouns are not only used in our lives but also in TV shows.

The Netflix sitcom “One Day at a Time” has an episode in season 2, “To Zir, With Love,” where there are two non-binary characters, one named Syd who goes by they/them another Margaux who goes by ze/zir.

Elena, one of the main characters, explains the topic of pronouns to her mother: “Some people are gender non-conforming. They have certain preferred pronouns.”

Another example of gender non-conforming pronouns being used can be seen in “Orange is the New Black” with the character Dominga Duarte who goes by they/them.

The show “Greys Anatomy” has a character named Toby Donnelly who goes by they/them and is genderqueer.

TV shows including non-binary and genderqueer characters helps to spread awareness and information to others who may not know about the importance of pronouns.

Sophomore Kaithlyn Gonzalez whose pronouns are they/them has shared their story and experiences with the use of pronouns. Gonzalez spoke on pronouns and how they wish people knew how to respect them rather than assuming what they are based on looks and the way they act.

Gonzalez stated, “People tend to pinpoint their pronouns based on what they think is right to them.”

Although they have not come across someone who has misgendered them in a disrespectful way, there have been people who accidentally used the wrong pronouns.

However, Gonzalez stated that they don’t feel too bad when people use the wrong pronouns if it’s an accident or they don’t know. Gonzalez just corrects them.

I asked Gonzalez how they feel when people do use the correct pronouns, and they stated that it makes them feel good about themselves and valid.

Lastly, Gonzalez believes it’s important for people to be educated about pronouns because “it shows some sort of respect, and when respected, it feels nice and makes [others] feel more confident.”

Pronouns are used everywhere and everyone should be entitled to use the ones they prefer without being disrespected for their choice.

One way people have been spreading awareness is by putting their own pronouns in their social media names or bios. Doing this helps let other people know the correct way to address them.