2020 is being burned as wildfires invade the West Coast 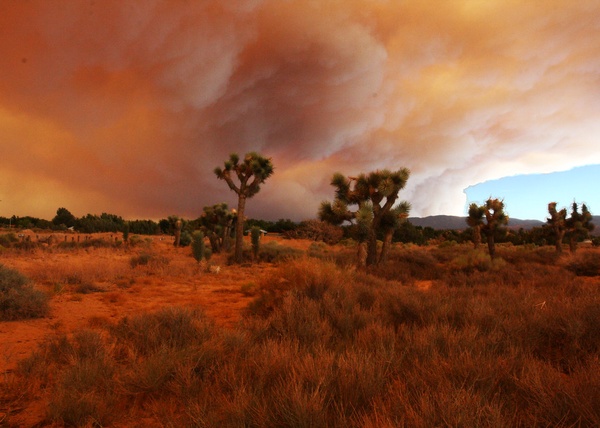 Smoke from the wildfires covers up most of the sky in the Mojave Desert.

2020 started off on the wrong foot and now to make things worse, the West Coast is being covered in flames since the start of the summer.

In California, these fires have consumed a total of about 3 million acres compared to the estimated 260,000 acres in 2019 according to Cal Fire.

This dramatic increase in acres poses a great concern regarding the environment among the public, especially because the damage was more noticeable.

Despite the fires being miles away from Santa Ana, the city still experienced the effects of the fires.

Junior Yarethsi Leal said that she noticed the effect in the sky.

“One day I looked outside and noticed how dark and orange the sky looked; it almost looked like it was out of a movie. The quality of air was also not great and the air felt warmer. People also seemed more anxious now that another danger was added on top of COVID-19,” said Leal.

As Leal mentioned, the air quality was also affected because of the smoke from the fires. And the smoke was very damaging to everyone causing changes in their routine.

The smoke created a challenge for Angela Ochoa, a Madera County local.

“Not able to go outside due to the smoke and had to leave earlier for work because it was like fog,” said Ochoa.

These fires on the West Coast were impactful to the community because of their size and speed.

According to AP News, “… a wildfire in Plumas National Forest northeast of San Francisco spread 25 miles (40 kilometers) in a day and devoured an estimated 400 square miles (1,036 square kilometers).”

The wildfires are traveling vast distances in a short period of time, making them even more difficult to contain. Firefighters from Mexico have come to help the US firefighters combat the destructive fires.

“Mexico said Wednesday it will send 101 firefighters to the United States to help battle wildfires in California,” stated US News.

This is in addition to the other firefighters that were sent from Heroico Cuerpo de Bomberos Voluntarios of Guanajuato, Mexico who were sent to Oregon as mentioned in Hiplatina.

With all the negative events in 2020, the communities have come together in the aid of the fires and were quick to respond which is very important.

“Our local community worked fast and hard to help everyone they could with food, shelter and clean clothes,” said Ochoa.