“The Danish Girl”: I’m trapped inside the wrong body 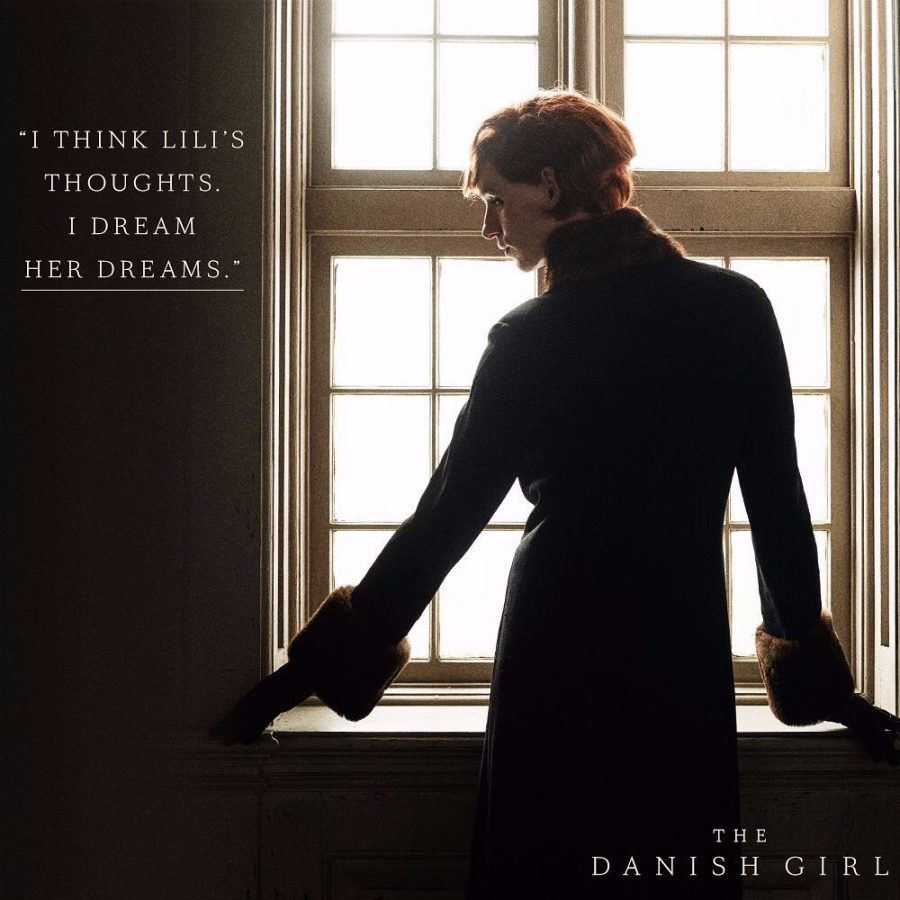 In the 1920s when people didn't know what it meant to be transgender, Lili Elbe realizes that she is a woman and won’t let anything get in her way from transitioning into one.

When I was 11 years old I realized that I was a boy. That I was transgender to be more specific. Being a boy wasn’t something that I had suddenly decided to do on a whim. I already knew that I was a boy. I just didn’t know the vocabulary to describe the way that I was feeling. My dad wasn’t too happy with the fact that I came out to him because at the time he was very religious. He told me that it was wrong of me to choose to be transgender. That it was like a plastic cup trying to be a glass bottle. One thing I’ll never forget about that day was the anger he had in his eyes, and the resentment he had towards me because of what I said. I believe that I can apply the movie “The Danish Girl” a lot to my life because of the many obstacles the main character Lili Elbe has to face in her transition to becoming a woman.

“The Danish Girl” takes place in the 1920s. During this time society didn’t see being transgender in a positive way. The main character Einar Wegener who later on in the movie becomes Lili Elbe, struggles with her identity. She struggles trying to find out who she is because there isn’t any vocabulary to describe the way that she’s feeling. Even though Lili faces many obstacles she is able to undergo the first sex-change operation with the help of her wife Gerda Wegener.

There’s a scene in the movie where Lili is walking home by herself and she gets approached by two men with bad intentions. They taunt her by calling her names like lesbian and gay and aggressively ask whether she is a man or a woman. Lili, getting annoyed with their harsh words, fights back but unfortunately, they beat her up.

I can relate to the bullying that happens in this scene because most of middle school I was bullied for being transgender. There honestly wasn’t a time where I wasn’t being called  a “lesbian” or “it.” Going to the bathrooms or being in the locker rooms was probably the most difficult problem I had to face because that’s why the bullying happened. Whenever I would go into the bathrooms I would always be laughed at and called names.

For every transgender person, it’s pretty normal being  impatient with how slow the transition can be.

Lili finally feels relieved with the fact that she can undergo a sex-change surgery. However, Lili is very impatient with how slow her transition is going and isn’t taking good care of herself.  She wants to become a woman already because she doesn’t want to feel like she’s trapped in a body that isn’t hers. But because she isn’t taking good care of her health, the surgery could go wrong and she could get an infection.

When I first started transitioning I was also very impatient. I wanted to become a boy already but that’s not how things work. Everything takes time and if I tried to rush the process I could die. When it comes to taking testosterone or estrogen you start with taking the medicine slowly and slowly increasing the dosage because if you try taking too much too early it could kill you or put your health at risk.

Even though Lili knows that she’s getting the first sex change and there could be many complications that could potentially lead to death, she still gets the surgery because she wants to feel like she’s in the right body. There are two surgeries that she needs to get to become a woman. The first surgery goes well but the second surgery does not. After the second surgery Lili is in a lot of pain; Gerda is there with her trying to make her feel better. In Lili’s final moment she thanks Gerda for realizing her dreams and making them come true. Even though Lili is about to die, she’s very grateful and happy for going through with the surgery.

On September 1, 2020, I was finally able to get top surgery. A lot of people told me not to do it because I was too young and I would regret it in the future. That I would want to have kids and wouldn’t be able to do it because I decided to go with my transition at a young age. However, I’m very grateful that I never listened to these people because they have no idea what it’s like to live as if you’re an imposter in your own body. How frustrating it is to be born in the wrong body and everyone seeing you as someone that you’re not. I can say to this day that I would have regretted listening to those people and not doing what makes me happy because at the end of the day I have to live with myself and the choices I make. For the first time in my life, I finally feel like I’m in the right body. Like even though I was born female, top surgery has honestly boosted my confidence so much.

I’m also very grateful to my best friend Leslie Rangel for going through this whole journey with me and always being happy for me even when my parents weren’t. Her support was honestly able to get me through a lot.  I’m glad that she was always there for me.

To a lot of people who aren’t transgender, Lili getting the sex change must have seemed crazy. Like how could she risk her life knowing that there could be complications that could lead to death? But to us transgender people it’s not crazy; it’s honestly like a dream come true. Knowing that you’re finally going to feel like you’re in the right body feels amazing. It feels like a dream.

“The Danish Girl” is a must-watch movie because of how beautifully the actor Eddie Raymayne plays the role of Lili and how well he was able to portray the life of a transgender woman.