Not just someone’s sister, mother, daughter: We are humans too 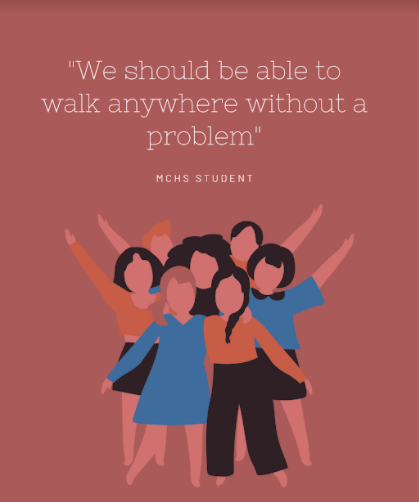 Females should feel safe enough to go in public spaces without being harassed.

Sexual harassment. It happens to a lot of people. I remember the first time I was harassed. It was my first time walking home from school; I was in sixth grade. I was almost home when a guy stopped me in my tracks. He stood right in front of my path and proceeded to ask me for my phone number, social media and tried to get me to hang out with him. I was only 11; the man looked like he was in his mid-twenties. I remember feeling terrified by him. When I told my mom about what happened, she sat me down and began to tell me ways to protect myself when I was alone. I was still a kid, yet I learned to be cautious. I still get scared when I’m alone and I sense a man get near me; my stomach sinks and my blood goes cold.

In the wake of Sarah Everard’s death in the U.K. in March, more and more people are getting outraged at how many women are assaulted and harassed on a daily basis. Beginning at a young age, many girls are taught techniques to protect themselves, but it seems like not many boys are taught about harassment and consent. From childhood to adulthood, many women live in fear of being assaulted. There have been worldwide protests against the rapes and killings of women, yet not much seems to be happening. I want to open up the conversation on sexual harassment because not many people know what falls under this umbrella.

What constitutes as sexual harassment? Sexual harassment includes behaviors such as catcalling, inappropriate comments about a person’s body or sexual orientation, slut shaming, coercion, groping, unsolicited touches, innuendos, asking about a person’s sexual life, repeatedly asking a person out on a date, following a person, blocking someone’s path, making sexual gestures, or displaying suggestive visuals; there is not a requirement that the people harassing gain any sexual pleasure or are sexually attracted to their victims. Sexual harassment depends on what the victim thinks; if they felt uncomfortable or unsafe, then it’s sexual harassment.

The Spellbinder reached out through social media to ask people questions regarding sexual harassment. Some girls shared their stories about their encounters.

“When I was like 11 or 12 I had this relative that lived with us for a few months and he would always hug me longer than I would’ve liked him to. My parents excused it by saying he was just very affectionate, but I wasn’t having it. Keep in mind he was in his mid 20’s. One day he and I were at the house alone, and he wanted to play a game. He said that if I lost this game, I would have to give him a certain number of kisses on each cheek (I don’t remember the number because it was like 4 years ago). Anyways, I lost the game. I gave him the kisses. It probably doesn’t sound like that big of a deal, but I’ve felt so disgusting ever since. I had to see him all the time afterwards; at my house, at family parties, and even on trips to México. He’s gone back to México since then and is getting married, so I won’t have to see him as much anymore. I was so sick of everyone thinking he was so cool and having the image of that night in my head. I haven’t seen him in a year, and I’m not planning on breaking that streak.”

“I’ve been catcalled a few times, and although it might have been harmless, you never really know. Especially the time it happened as I was walking home alone and a guy in a car full of men was yelling things at me. I remember constantly looking back on my way home. It’s interesting as well because I realized that every time it’s happened, it’s always been men and they’ve always been in groups, never alone. I think maybe they feel more brave around their friends.”

“Back before I even considered transitioning, a lot of my experience was spent being uncomfortable around guys and the constant worry that I’d be made fun of for my ‘less than manly’ personality or actions. I’ve obviously never had direct comments or actions made at me, as I transitioned from a man, but the culture of sexual harassment still made me uncomfortable everyday as harassment is an issue for everyone who doesn’t try to uphold it.”

“I’ve been asked about things such as what measurements of undergarments I wear, and they’re usually dismissed as jokes. Also, sometimes when I’m walking by people find it appropriate to grab me by the waist to make sure they have room to walk through.”

“I don’t wear revealing clothes simply because it’s not my personal style, but I was still catcalled in public. I was wearing a sweater that had a child-like pattern to it with loose pants, and honestly I look very young too. There was another time where I was on the bus in the morning on my way to school and this man started staring at me. I was relieved to see my stop to the school was next but when I got off, so did he. I tried staying with the crowd, but eventually everyone left and I was left alone with him. I just felt uncomfortable so I started walking faster and took unnecessary turns, but he still followed me. When he caught up to me, he kept asking me questions about myself, but I lied about anything personal except my age, to let him know i was still in high school, but it didn’t bother him. There’s also been times on the bus where I had to call someone and talk loudly so they knew someone was waiting for me when I got off because they wouldn’t leave me alone.”

“School wasn’t helpful in stopping this culture where girls had to remain modest in order to prevent perverted behavior by the boys. We had a ‘slap ass friday’ which usually peaked during P.E time, and even though every teacher was aware of it, they did nothing.”

It is important to understand what sexual harassment is because of how normalized some behaviors are; some people might not even realize they were sexually harassed because they weren’t explicitly touched or feel like their experience wasn’t as bad. Some guys might have thought they were flirting or didn’t realize they were making someone feel uncomfortable, however, when asking some boys from MCHS, many said they can tell from a person’s body language that they’re feeling uncomfortable.

“I think for the most part, I am able to know when a person is feeling uncomfortable based off of their body language.”

“They start making eye contact with another person or they try to make some distance with the person that’s bothering them.”

Some will reap the ‘not all men’ saying, but if you’re not stopping your friend from being creepy, then you’re part of the problem. It’s time to stop being a bystander and speak up against these behaviors; call out your friends if you notice any red flags. It shouldn’t just be up to girls to protect themselves. It’s time to hold the people we know accountable.