Being Deaf in a hearing world 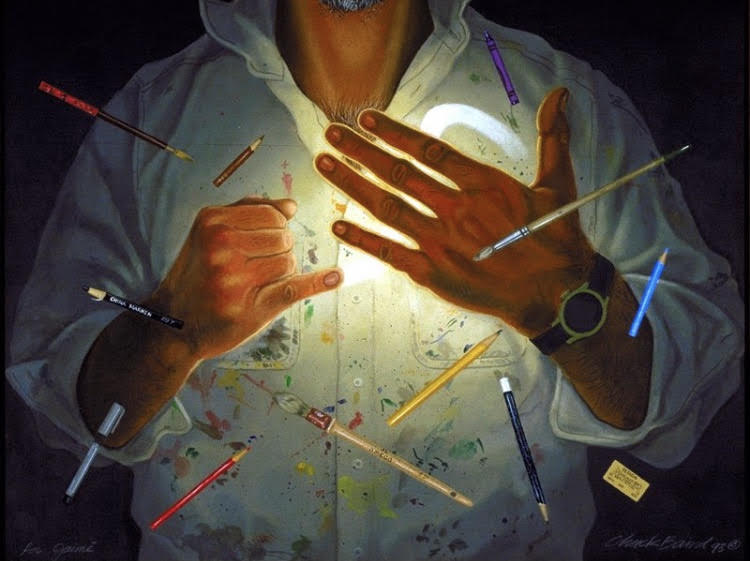 "Art No. 2" created by Chuck Baird, a Deaf artist shows a man signing the word "art" in ASL.

You cannot escape the hearing world. Since the majority of the world has the ability to hear, hearing has become an important part of life. The ability to hear is important in countless situations so much so that it is hard for hearing people to imagine what it is like to be deaf.

Approximately 600,000 people in the United States are deaf. Deaf people are not disabled, and there is nothing wrong with being deaf. They are, however, considered the linguistic minority.

Heather Arazi, 41, is a Santa Ana College professor. She teaches a class about Deaf culture.

Arazi grew up in a small town in Iowa. She went to a preschool program for Deaf kids but then became mainstreamed. Arazi was usually the only Deaf kid in the whole school. She was mainstreamed in public schools from kindergarten through 12th grade.

Arazi said, “I went to a small private college, but I wasn’t happy and I couldn’t quite figure out what was wrong. I transferred to Gallaudet University, and that’s where I really figured out my Deaf identity and learned more about Deaf culture.” Gallaudet is a famous school for the deaf and hard of hearing in Washington, D.C..

Arazi said, “I visited the Iowa School for the Deaf as often as I could convince my mother to make the four-hour round trip drive. I went to summer school there, and my memories of that place are of growth, friends, and happy times for me.”

Growing up, Arazi thought she was a part of Deaf culture but said, “I didn’t really realize how much there was to it. It’s not just a group of people with shared experiences; we have a common language, social rules, art, traditions, values, and many other aspects of culture.”

Arazi said, “I am a part of Deaf culture. I use ASL for a large majority of my day, and with my family. Pre-COVID, I attended Deaf events on a regular basis. During COVID, I stayed involved by participating in groups like the Southern California Registry of Interpreters for the Deaf (SCRID) and the American Sign Language Teachers Association (ASLTA), both of whom have online meetings through Zoom.”

When she was around other Deaf children, she felt like she could be herself. She understood everyone and knew what was going on. She said, “I could make jokes, and I had a lot of fun. With hearing children, even if they weren’t mean or intending to leave me out, I always felt like I was barely keeping up, that I was just trailing behind the group.”

“As an adult with a masters degree in Deaf Education, I now understand that a school for the Deaf is a much better environment because of the access to language, role models, and positive socialization,” Arazi said.

A school for the Deaf is better for a Deaf child because the teachers know how to support the kids properly. She said, “Teachers are trained to use specific strategies that are visual and support Deaf students and their needs.”

A lot of Arazi’s memories of school are negative.

She said, “I remember a drama class where I had to do an improv with two or three other students. The interpreter has to lag behind a bit as she translates between the two languages so I had a difficult time getting the last thing that was said, thinking of something to say, and responding before the next person said something. My teacher became so upset with me, he forced me to do an embarrassing improv with him as a store manager and me begging to use the restroom. At the time, I didn’t understand the nuances of interpreting and why I was struggling with it, so I believed that I was a bad or stupid student.”

Since she was mainstreamed in schools where she was usually the only Deaf person, it could get hard at times. Arazi has one good memory.

“I do have one positive memory of giving a speech that basically made fun of hearing people and the mistakes they make when interacting with Deaf people. For example, when hearing people over-exaggerate their lip movements, since I don’t lipread. I won first place in a speech contest, and it was the first time I felt like I was seen and ‘heard’ by hearing people. People actually saw value in me, that I had skills, and I wasn’t dumb or invisible,” Arazi said.

Arazi used to go to summer camp. “When I went to summer camp with other Deaf children, I remember feeling free to try out new activities and to learn new things. There were activities like arts and crafts, horseback riding, tubing, canoeing, rock climbing, etc. I could choose any activity I wanted and didn’t need to worry about not understanding what to do.”

Arazi said, “I remember while tubing, I touched something under the water and freaked out. I imagined some huge underwater creature trying to eat me alive! The Deaf counselor explained to me that it was probably just a log or a rock and even if it was alive, it was small, and they probably don’t want to get close to me. Having someone explain these kinds of things to me made the rest of the tubing activity more fun, and I felt safe.”

Arazi has had mostly good interactions with her family. She said, “We had family vacations, often ate dinner at the table, and did a lot of activities together. My family is all hearing, my mom used SEE (Signed Exact English, a system of signs that represent English and is different from ASL), while my brother, sister, and dad mostly fingerspelled the alphabet. There were some not-so-great memories as well, but overall good.”

Fingerspelling and SEE are representations of English but aren’t real languages like ASL is. ASL has been developed over generations and has its own grammatical structure separate from English. Most Deaf people use ASL.

Arazi said, “When ASL was found to be a valid language in the 1960s, and Deaf culture was validated in the 1980s, that really boosted the acceptance of Deaf people and ASL. Now, it’s just a matter of time for that information to get around and passed down to our children.”

Deaf people can face discrimination. Arazi said she has faced lots of discrimination, some being major and some minor. Arazi faced discrimination when she was being interviewed for a job as a nanny.

She said, “I had experience as a nanny, loved working with babies, and baby signs were starting to become popular. The interview went great, and they did ask me what I would do if an emergency happened. I explained that I can call 911 through a videophone, I had CPR and first aid certification, as well as further training through an EMT course. When I called to inquire if they had decided to hire me or not, they said ‘we prefer a person who can hear.’ I later found out through a friend that the person they hired did not have CPR/first aid certification, and there was an incident where the child experienced a seizure, and it took some time for the nanny to recognize it and get help. It frustrates me that people choose to focus on what one cannot do, rather than to look at the qualifications and skills they have.”

Arazi used to view being Deaf in a different way. She said, “I used to think that the world views Deaf people as dumb imbeciles. Now, I think it’s a more positive view. I know that some groups believe Deaf people are a curse or are not worthy of respect. Since these seem to be deep-rooted societal beliefs, I can only hope that these will change over time.”

Diane Gamache, 43, is also a professor at Santa Ana College. When she was growing up, ASL was looked down upon and people tried to get Deaf people to communicate with their voices. This is known as oralism.

Gamache moved around a lot due to her parents’ jobs. She attended elementary school with hearing kids.

Gamache said, “I didn’t think I was different from others until we moved to Arizona when I was about nine years old. Another student was waving around with her hands, so I asked my new classmate what she was doing. My classmate explained that she could not hear and doesn’t wear hearing aids nor speak. I realized that I am like her but can hear with hearing aids and speak but not perfect. I immediately learned sign language, and the rest was history.”

She attended regular schools instead of schools for the Deaf because of distance.

Gamache has seven siblings. Four of them are Deaf, and they didn’t start using sign language until she convinced them to. Gamache learned sign language from one of her friends.

Gamache is a part of Deaf culture.

She said, “Seeing my friends is one of the highlights of my youth. The people in the Deaf community are like the second family to me. With new technologies nowadays, things are much better. Remember, during the 80’s and early ’90s, there weren’t any smartphones or internet access.”

Gamache has faced discrimination. She said, “People assumed I am an expert in lipreading and believed I could understand what’s being said. But that’s not true. One of my classmates didn’t think that I was from America because of how I speak. He assumed I was from another country.”

She said, “Growing up has its challenges in one way or another. While I was growing up, there weren’t any captions on TV. I remembered going to Blockbuster store and looking at VHS to see if there were any subtitles on it. Most of the time, there weren’t. Not only VHS but TV doesn’t include a caption device during that time. We had to buy a caption device and hook it up to the TV. The caption device was quite expensive during my time, and my parents had to save up some money to purchase it.”

Not all stations were captioned, so instead she read books to pass the time and escape reality. She would often go to the library and check out books.

Gamache said, “I know many people are not educated on dealing with the Deaf people and therefore had a different ideology of what’s Deaf people think and do. One story of discrimination that I can share with you is the rental house. When my husband and I were searching for a rental home in Southern California a few years ago. One of the landlords called one of my references and asked if we can function as a tenant due to our deafness. It’s still an ongoing process, and I have to educate those who asked me those questions.”

Arazi has a message for hearing people.

She said, “I would like hearing people to know that the Deaf community has its own culture, traditions, art, and language, just like any other culture. ASL is a pretty cool language, and I think a lot of students find it more enjoyable than spoken language. ASL classes are pretty cool, with lots of games, activities, and fun things.”