Buckle up: teens thoughts on driving 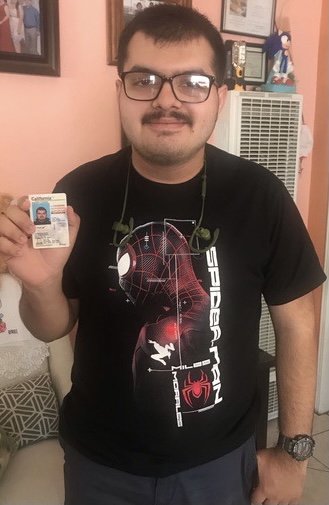 Senior Joseangel Regalado, shows off his license after passing the test.

Drivers License: when most teens hear these words they think of freedom, independence, and growing up, but they also think of nervousness and fear.

This begs the question: What do teens think about getting their license and driving?

“I see it as a privilege and a responsibility. It’s not just being able to go out and get your own happy meal, but also being someone the family relies on to move the cars when the street sweeper comes or driving your parents somewhere when they aren’t able to,” said senior Joseangel Regalado.

Recently Regalado got his license and when asked what that meant to him he said that it is both a privilege and a responsibility. He mentioned that some teens learn in order to help their families get around and to be there when they need them. Regalado mentioned that a license offers freedoms while also giving responsibility to be there for your family and allowing him to help more.

“I see it as a sign of freedom and a sense of being independent. You don’t need to ask your parents to drive you somewhere anymore, you could just go,” said Tony Vu.

Vu mentioned that in addition to the freedoms that driving brings, he was also encouraged to learn so that he’d be able to drive himself to school. He mentioned that being able to get places on his own would make things easier for his family because they can get busy with work.

“I believe parents may push their teens because they want them to become more responsible, independent, and maybe even helpful. Driving can also be very beneficial to an individual, especially one that is becoming an adult in a few years.”, said junior Ali Naqvi.

Naqvi is currently in the process of trying to get his license and when asked about what parents may think about driving he said that they might try to push their kids to do it. He mentioned that like Regalado, the family may need their help or want to teach the teen some more responsibility and that is why they would push them. Additionally, when asked if teens are actively trying to get their license, Naqvi said that he believes many do, but some rideshare apps (like Uber and Lyft) can cause a teen to hesitate.

“Teens might not see the need for a license, and parents might push for a license more because they see Uber as a waste,”  said Regalado.

“Yes, I do think they have a fear around driving. I certainly did. It was nerve-wracking starting out. Whenever the road felt a little bumpy I got worried I was a second away from an accident. I’m a lot more confident now with more practice, but I still get a bit nervous”  said Regalado.

Naqvi, Regalado, and Vu mentioned that some of the reasons that teens may delay learning to drive are the fear of it. Naqvi mentioned that his “ fear of driving began when [he] first saw people driving carelessly” because even if he’s careful something bad can still happen. He talks about how seeing the aftermath of careless driving has caused this fear to grow due to not having any control of it. Despite this Naqvi mentioned that getting a license and driving is a beneficial thing to be able to do.

“A license is a good investment of time. It can take you many places, and with practice, it works great. Just let me say, it’s way better than the bus,” said Regalado.

“For anyone else that is being encouraged to drive by their families, or someone close to them, I would advise you to deeply think it through…. driving is a big decision; not only do you have to drive safely for yourself, but the responsibility of others’ safety is also in your hands. You shouldn’t push yourself to drive if you aren’t ready. However, don’t let this discourage you, just the way you have matured into earning your place in MCHS, and becoming who you are today, you will continue to mature until one day you are ready to drive and handle such responsibilities. Just have patience, and when the time comes, things will play out the way they should,” Naqvi said.