Unlearning toxic customs and beliefs in the Hispanic community 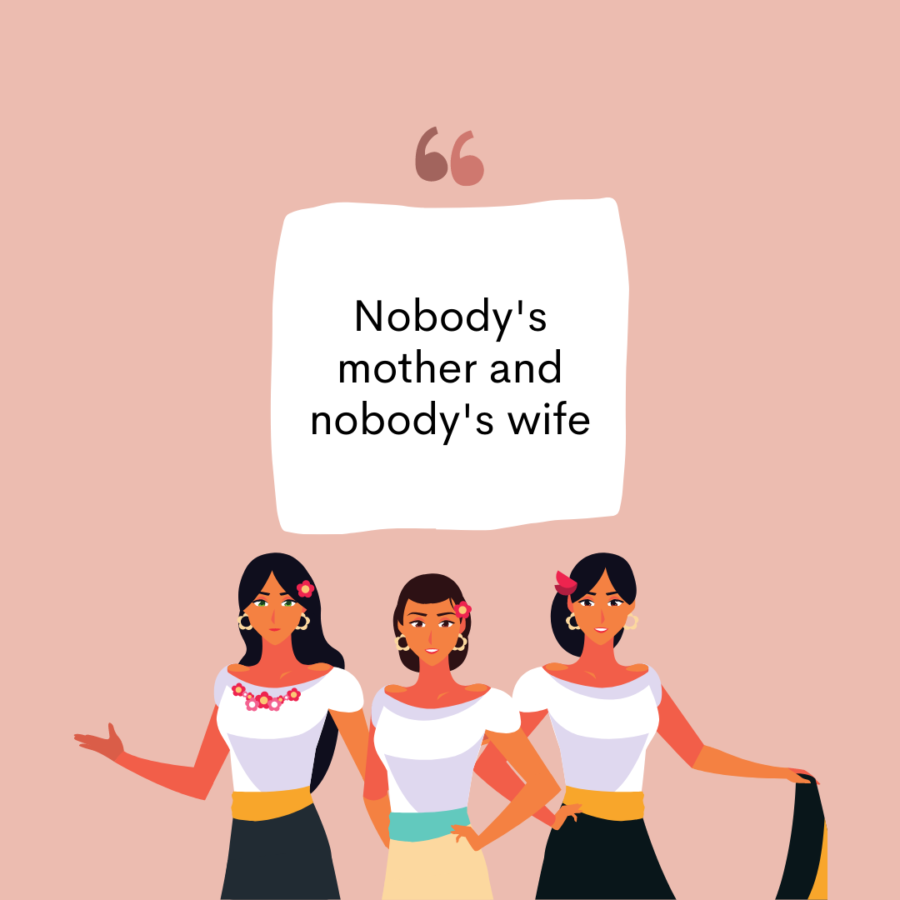 created with Canva by Ashley Santana

This quote by Sandra Cisneros breaks the housewife stereotype.

“I’m nobody’s mother and nobody’s wife.” These are some of the greatest, most empowering words said by Latina author Sandra Cisneros. But what does it mean? It implies toxic gender roles where males are seen as authoritative and the ones “in charge” meanwhile, the females are perceived as traditional housewives. Machismo in Hispanic culture has affected generations because it teaches toxic gender roles to children.

“Living in a Hispanic household can be overwhelming, not only because I’m a woman but also because I’m the oldest and expected more of. When my mom isn’t here, I have to act as a stand in for her by cooking and cleaning and taking care of my siblings. When I wish to go out, it’s very hard for me to convince my parents especially since my dad gets the last word,” said sophomore Carolina Perez.

Double standards and stereotypes are unfair and sexist because they indicate how women and men should act. Many times, the males are not assigned many responsibilities around the house because they’re seen as a provider and that it’s more than enough. Many times this influences them to take authority and demand respect from their wives and children. Where daughters aren’t treated fairly and sons are given more liberty.

Perez said, “Women are encouraged and sometimes expected to become housewives because it’s easier and something they’re used to doing. The women always have to cook and clean for men, but [there’s never isn’t much expectation for] men other than providing financial support and handiwork.”

Sophomore Aymee Marin said, “My brother has never gotten the same treatment as I have. There’s higher expectations for the girls like doing difficult chores such as cleaning every room, whereas my brother gets the simplest chores. Even though I’m younger, I’m expected to do more around the house.”

When asked who gets the last word in their household, all but one of the interviewees said their father did. Therefore, even if their mother had given her approval or permission, if their father said no then no would be the final answer. This shows just how domineering machismo can be.

Toxic masculinity also plays a factor in double standard gender roles. For example, some things would be seen as improper and unladylike in women, whereas it is seen as impressive and praised in a man.

Perez said, “If the boys in my house have a girlfriend, they praise them as it’s something to be proud of but when the girls get one, it’s ‘oh no you can’t have one, imma beat him up.’ The boys have to help our dad with the more physically challenging work, meanwhile the women have to stay inside and help our mom tend the boys.”

Sophomore Gil Lopez said, “Some double gender standards in the Hispanic community are that girls are less likely to go out in public places than guys, or if they do, they have a shorter curfew and more consequences than a typical Hispanic guy would have. Or when a woman wears an outfit that shows skin. When a woman wears a skirt, people assume she’s promiscuous and rebellious. When a man wears a skirt he’s a risk taker and a fashionista. Even though it’s the same piece of clothing, people automatically assume a girl is dressing to impress or she’s ‘asking for it.’ It’s absurd and there are far more cases than simply clothing.”

Double gender standards aren’t the only important ideology in the Hispanic Community. The gender role of a woman is to take the “good mother and wife” role. This means that they’re expected to obey their husbands and tend to everyone in the house. Men, on the other hand, are expected to be the “man of the house” and be seen as “masculine” and “strong” by doing the harder jobs around the house. Women are expected to serve men and please them because of some nurturing instinct men seem to believe they have. It’s even been romanticized on the internet.

When you attend a family party, reunion, or gathering don’t you find it ridiculous and aren’t you incredulous that the women are always the ones cooking and serving everyone, making them the last ones to sit and eat? Is it too hard for men to get up with their god-given hands/legs and serve themselves a plate of food? Instead, they’ll wait until a woman attends to them. I can assure you almost every single woman has noticed this and it does not sit well with them.

However, with each year we begin seeing things for what they are and understand that there are a lot of toxic customs we need to unlearn. So, why is it so hard for old fashioned and traditional Hispanic households to let go of these?

Marin said, “Hispanic culture mostly revolves around religion, and the bible also revolves around men being superior to women and I believe that it was incorporated into the culture which led to these sexist rules.”

Lopez said, “One main reason is the fear of educating men about their behavior. This internalized misogyny has been rooted into Mexican culture and it won’t be dug out unless we begin to reprimand young boys’ actions in healthy ways towards women. As well as, not blaming women for men’s actions. Teach young boys to respect and appreciate women. If they say or do anything harmful about them, educate them that women are human and they deserve to be treated as such. It always starts young! Plus, we need to start focusing on the men who are excused for their inappropriate behaviors towards women.”

Junior Sahira Cariño said, “I think it’s because it’s all they’ve ever known. They were raised into this culture and told that any other form of living is wrong. They might be afraid to change and explore. Or maybe they just like the way they live. Without a doubt women are nowhere near as respected as men. In every form. In their work, in their homes, in their family, etc. I still feel as though we are seen as objects.”

“I think they’re afraid to change because it’s all they’ve known and have been raised into. In my family, I feel like they’re more stubborn about keeping traditions. However, it is toxic in the way [that] family members are gaslighted and humiliated for caring about a woman because women aren’t as respected. Women do a lot for men, even as far as acting like their mother and not wife. Men don’t see women as their equal partner; they don’t feel the need to respect them,” Perez said.

Although many traditional households won’t be able to let go of all these double gender standards, toxic masculinity, machismo, and misogyny, the younger generations don’t plan on tolerating any of it.

“I will 100% be letting go of the whole women belonging in the kitchen and men who are meant to work stereotype. However, our celebrations and seeing family often will be a tradition I will continue,” Cariño said.

There are many great things about Hispanic culture. It’s beautiful, unique, and very expressive. Even though there are downsides, there is a long way to go in unlearning customs and traditions that degrade women.