Leaving quarantine: How our pets are handling the transition 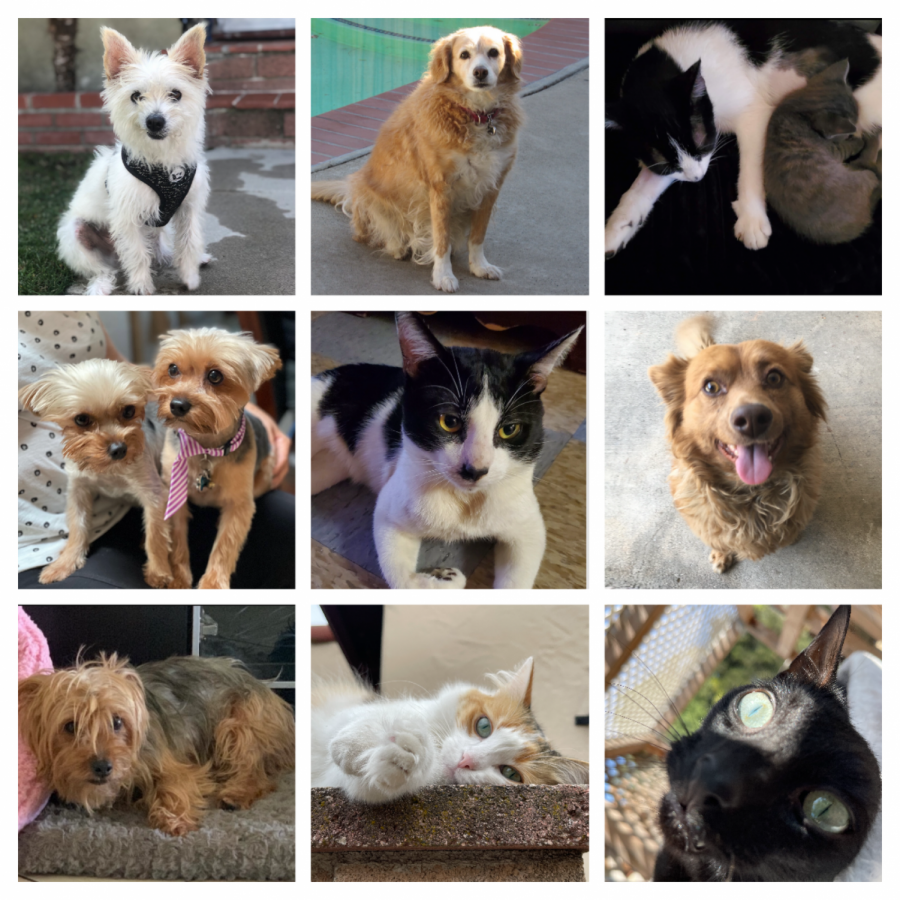 Last year was the most I’ve been around my cats. From when I woke up until the time I went to bed, they were there. I wasn’t used to seeing them as often, so I was excited to say the least. They were confused about the situation but happy to get extra attention. My cats helped me get through a pandemic. I’m not the only one who was comforted by a pet.

Junior Andoe Glaser said his dog, Berkeley, helped him get through the pandemic.

He said, “I gave him a lot more attention during the pandemic. I was able to spend more time with him,” Glaser said.

Berkeley is a spaniel mixed with a golden retriever.

“The only thing that was pretty difficult was that during the pandemic we started having more family dinners, so we kept feeding him from the table. Now he begs for food,”Glaser said.

Glaser described a feeling of attachment towards Berkeley. Leaving him on the first day was hard, but it wasn’t a new feeling.

“It was hard but since I’ve done it before, I knew it would be okay. I made sure to say goodbye to him before I left and I gave him a lot of pets,” Glaser said.

He said, “I think he’s doing fine. He still gets plenty of attention and maybe even more than before because I always want to give him pets when I get home.”

He said, “It is a little weird not seeing him all day like I did in quarantine. To be honest, I don’t think Berkeley cares that much. He has some people around the house to give him attention while me and my brother are gone.”

Glaser wanted to add, “Just that I love my dog.”

Junior Alex Prado had three dogs during quarantine. Their names are Princess, Gigi, and Max.

Princess is around 7 years old and Max and Gigi were born during quarantine last year. Princess is their mother.

Prado said, “It was different between Princess and the two quarantine puppies. With Princess, she grew up with our regular schedule of school and any other activities we had. With the puppies, however, they got so attached to us so it was hard to leave them alone when we went out.”

Prado thinks Princess may have been confused by the sudden change of schedule.

Prado said, “It wasn’t really hard until the restrictions for COVID started getting lifted. We would begin to go out more and we would see how the dogs would act differently. We knew they weren’t alone because they had each other, but we missed them just like they probably missed us.”

Leaving for school on the first day was hard for Prado. He said, “It was hard because we didn’t know what to expect when we returned home. I tried to focus on school but there were times where I just missed them.”

Even though it was hard leaving, he thinks the dogs are doing well. All that has changed is the amount of attention they receive. Prado thinks that over quarantine their relationships grew stronger.

“It’s been a few weeks now so I think that they have gotten used to it. The two female dogs did end up giving birth to a total of seven puppies which makes it harder for us,” Prado said.

Prado and his family are taking care of the puppies for the next few weeks. They have already found people to take them, but they are trying their best to care for them until then.

Prado said, “I think that people should remember to spend time with their pets. To us, it might feel like we’re gone for a few hours, but to them, it is more than that.”

Junior Samantha Esparza has a dog as well. He is around eight years old and his name is Naruto.

Esparza said she doesn’t own the dog, but she watches after him so much she considers him her own.

Esparza said, “Taking care of him during quarantine really helped me as a distraction from the pandemic. It’s fun spending time with him and he always makes me laugh.”

Esparza said it didn’t get hard taking care of Naruto because he’s so well behaved. Esparza said, “He is very calm and he sleeps a lot.”

Esparza misses Naruto. She said, “I do miss him now that school started because when we did virtual classes he would always lay next to my chair and sleep. Now that school has started, I see him a lot less because I have a lot of activities to complete but I still make sure to give him attention and care.”

Leaving Naruto on the first day was difficult for Esparza too. She said, “The first day of school I missed the fact he wasn’t next to me during class like he was last year. However, it’s exciting arriving home because I know that he is the first one waiting at the door for me to arrive.”

Esparza said, “I think he’s slowly getting used to the fact that I am not at home full-time anymore. The first few days of school he seemed sad and tired, but as the days go on, he seems to be happy again.”

Esparza said that adjusting was difficult for both of them. She said, “Since I began taking care of him, we have been close, but during quarantine, the bond grew stronger. We are both getting used to the new routine and appreciate the moments we spend together.”

Esparza said, “During quarantine we both became more attached to each other because we were together 24/7. My parents always said, ‘I don’t know what Naruto will do once Samantha goes back to school’ or ‘I don’t know what Samantha will do when she goes back to school and won’t see Naruto as much,’” said Esparza. “Quarantine was a difficult time and it was important to have a support system. My support system was not only my parents but Naruto as well.”

Junior Kimberly Lopez has a dog and a fish. Her dog’s name is Snowy and her fish’s name is Tortilla. Tortilla is four months old and Snowy is 5 years old. Lopez got her fish in quarantine.

“My pets were needy but I was needy too; although my dog was taught a few tricks while my fish was just there in the corner eating,” Lopez said.

Lopez said that when she goes to the backyard if she says, “Back” Snowy will run to his nearest toy. When she closes the door to the back he goes to greet her. He also learned to sit next to Lopez when she gardens. Snowy helps her by digging a hole when she commands him to. The last thing Snowy learned was that when he wants food he just needs to move his food bowl and he’ll get a refill.

Lopez said that it got hard raising him in quarantine.

“He was super needy and always barked at us for no reason. He also hates bath time or getting his hair taken care of, but it’s only grooming that we had a difficult time with,” Lopez said.

Lopez used to get Snowy groomed but since quarantine she started doing it herself.

Lopez watches Snowy when she has a chance at school.

“I do miss him but I check my camera that’s nearest to him to see if he needs anything or if he’s just bored,” Lopez said.

She said it was hard leaving him, but once she finished the first day, she checked on him and talked for a few minutes.

Since Lopez has been gone, Snowy has become the guard of the house.

She said, “I think that he’s just waiting to get fed and just barks at people while we are away to protect the house, but he mostly sleeps since it’s hot outside. We bought him a little tent, and it protects him from heat and rain. It’s very useful. He’s very excited when he sees us. He’s a little ball of energy.”

Lopez did not have Snowy inside while she was in class last year. She said, “We’ve always been apart because during quarantine I still had school. After classes I would spend an hour with him which was very fun.”

She said, “He’s always been on his own for most of the day so the change wasn’t that dramatic, only that he has been very energetic.”

Lopez described how the dynamic between her and Snowy has changed.

She said, “Our relationship has changed. We are more connected ,and I feel that he is my therapist, and it makes me smile since we both need a way to express ourselves.”

Snowy has been handling the change well.

Junior Ashley Santana got her three cats in quarantine. Her cats are Whiskey, Crystal, and Winston. Whiskey and Crystal are seven months old and Winston is nine months old.

Santana got her cats in May of last year. She said, “I got them in May so a month into quarantine. We were so bored and we thought why not.”

For Santana and her family it was easy raising the cats.

“It was not hard to raise them during the pandemic because we rarely left the house so giving them all our attention was easy. There were six of us to give them attention.”

Santana thinks they’ve become more affectionate since they’ve gotten so much attention. She said, “It only got hard when I started coming back to school because they’ve grown so accustomed to us being around that not having us around makes them grumpy.”

Santana misses her cats every day.

She said, “I’m always excited to get home because that means I get to see my cats and they’re happy to see me.”

For Santana, leaving them behind on the first day of school made her worried.

She said, “It was hard because I kept worrying if they were okay without any of us being there so it was a thing that was constantly on my mind but with time it got easier and I don’t feel worried at all anymore since they have each other. I think they’re adapting just fine.”

Santana described the transition for her and her cats as not too difficult.

She said, “I’m not away for too long but on the days I get home later, I get messages from my mom telling me that the cats have been looking for me and it makes me not want to get home late.”

Santana said, “My relationships with my cats have not changed much because I still see them on a daily basis, and I spend a lot of time with them regardless of how long I’m gone. The only hard part is leaving them in the morning, but it’s comforting knowing that I’m going to come home to them.”

Santana ended with, “I think pets are great for mental health.”