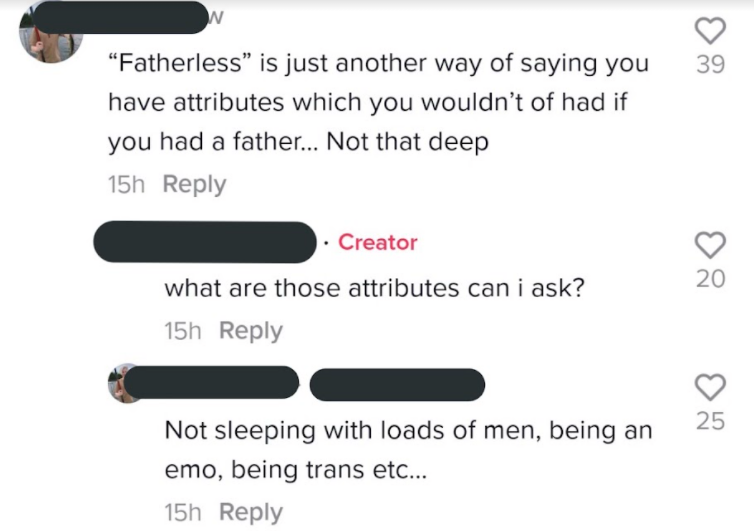 This is an example of a man using the word "fatherless" with a degrading and insulting explanation.

The term “daddy issues” is commonly used to describe women with poor relationships with their father. Over time this term has evolved to an insult men use to shame women and victim-blame them.

The term is definitely gendered towards women and more often aimed towards them. It’s loosely thrown around by people, mainly men, to humiliate and shame women’s behavior. When the term daddy issues is being used to degrade women, it victim-blames them and blames them for the issues created by the father figure in her life. Men may use this to shame women based on the women’s relationships with men, dependence on others, and trust issues with people.

Sophomore at Valley High School, Jasmine Moralez shared her involvement with the term.

Moralez has heard this term directed at her. She said, ¨Someone once told me in an insulting manner that I act the way I do is because I have daddy issues and I’ve also been told that I will ‘like men like my father thanks to my daddy issues’ which was meant as an insult.¨

“Daddy issues” shouldn’t be used as a derogatory term because they impact one’s life in a harmful way. It’s disappointing how people have turned this term into a way to shame women when it’s the result of a man lacking as a father.

Many don’t truly understand the effects of having an absent father. It can lead to so many different emotions and can ruin the perception of love. It has even been reported it can cause attachment issues and trust issues. Having the privilege of being able to trust is not seen in those with “daddy issues” due to the fact they believe people around them may leave like their father has.  Another effect is it may cause someone with “daddy issues” to constantly need or want attention or seek validation in others.

¨I never really celebrated my birthday with my dad; he and I never spent time together without awkwardness and he’s never taken me to a father daughter dance or anything. I just feel like I’m missing all those important childhood moments,” Moralez said.

This goes to show how impactful the lack of a father figure is. Yet people have still found a way to make this term be used to hurt and offend women. It reflects on victim-blaming and makes it seem like women are at fault.

“I believe I have some issues I’m allowed to blame on my dad that have caused me to have issues regarding male figures. A couple effects this has had on me is having low expectations for every man I’ve had interest in and even low expectations from my dad and from viewing how my dad has treated my mom, it’s conditioned me to tolerate unhealthy relationships. Even more so though, I fear being abandoned or rejected by males I may admire,” an anonymous source stated. “Being open about this has led men to make jokes about me having daddy issues.”

Not only is this seen within our community but also on social media. When women post something even just a bit revealing or open about their romantic relationships, some men will comment on this saying they are exhibiting certain behaviors because of their daddy issues. A popular comment men make on women’s posts is “Fatherless activities,” all of which is shaming women for not having a father. This is victim-blaming.

This term needs to hold men accountable for their poor choices as a father rather than using it to criticize women for their trauma responses.