The drive for diversity in television and movies 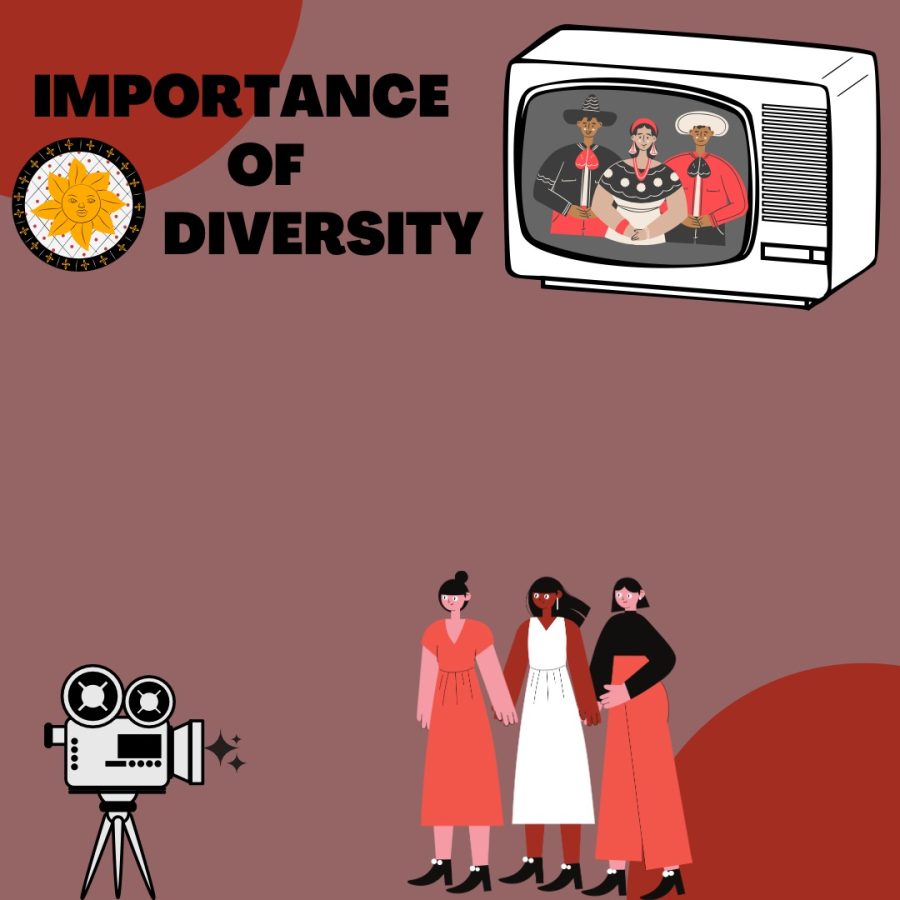 Kaithlyn Gonzalez (made with Canva)

As we progress, the drive for diversity is becoming more important as more and more people ask for representation.

For decades we had our entertainment from television shows and movies. In the past 10 years our entertainment has expanded to include streaming services such as Hulu, Netflix, and HBO Max. Sadly, even with our many options of entertainment, most feature mostly white individuals. Representation for ethnic individuals is important for many people so it is a way for individuals to feel connected in ways they haven’t before. Almost 20% of the population of the United States identify as Latinx but they do not see themselves in the entertainment they are viewing.

Sadly, there hasn’t been much for people to connect to due to barely any Hispanic or Latino actors getting cast. Statistics show only about 2% of Hispanics are shown on American television. With 18.7% of Hispanics and Latinos making up the US population, the representation percentage is very low. Representation has been slowly declining and shown only in small amounts.

Producer Gloria Calderón Kellet spoke about her plan in a recent podcast called “It’s been a minute with Sam Sanders” on National Public Radio.  She encouraged the amount of Latin and Hispanic TV.

Calderón Kellet said, “You know, we are – Latinos are almost 20% of the U.S. population, and we are 5% of what is on television, and those 5% are still largely stereotyped roles. There’s no television right now that’s mainstream on network, with the exception of “Promised Land,” which just premiered, that centers on a Latino family.”

Calderón Kellet makes a fantastic point. Even with companies like HBO Max, AT&T, and Johnson & Johnson showing some recognition and speaking out about Hispanics and their heritage month, there is still extreme under-representation. All while Hispanic Heritage Month is always used as an excuse to never show Latino and Hispanic representation other times. There are rarely any Latino or Hispanics shown at all in the media. About 7% of Hispanic actors are given a lead role in movies and tv shows, and are instead given a side piece to play. Individuals such as Ed Koch, Lupe Vélez, and Lazaro Cardenas, have spoken against Hollywood, bringing the fact there is no individuality and still Hispanics and Latinos are still under-cast.

Calderón Kellet is currently trying to educate all Hispanic and Latinos about opportunities, especially media working opportunities. Calderón Kellet has spoken about her discomfort with white people running shows which are supposed to be Latino and Hispanic led. We have to fight for change when it comes to these types of issues because no one else knows about our culture like we do.

She said, “I think having more Hispanic representation would be wonderful. I like to see my people on the screen winning awards and becoming successful. It can prove to the younger people that they can be like them and feel pride within themselves.”

This reporter’s mother, Belen Guerrero, said, “I think even though this is not our country we can still show Americans how our culture is. Especially movies with Hispanics/Latinos that are aired onto movie theaters.”

Stereotypes are very harmful to our communities. There are a lot of stereotypes written about Latino and Hispanic people, and a lot of those stereotypes are untrue. Most of the time in shows and movies, Hispanics and Latinos are given the role to play as criminals, murderers, and the most significant role, drug dealers. This has created the false idea that Hispanics and Latinos are dangers to society or people to stay away from in general.

It is racially motivated and it warps the way people see Hispanics and Latinos. Many children grow up learning that their people are portrayed as horrible beings. Famous actor, Michael Pen֘a spoke out saying, “For me, I tried to rationalize it and not become a victim, cause when I become a victim it kind of stops me, it takes the control out of my hands. And it helped me specifically to not feel like that, knowing that I have some disadvantages in it. I did not want to be bitter,” he said.

Bobby Vigo, 16, said, “I always looked up to my people. Like “Nacho Libre.” He was super funny and represented the Mexican community in a great way. I loved watching that movie with my family. It was a great representation, nothing stereotypical or racist.”.

Giving different cultural audiences the representation they need is great for many reasons. It can truly help people connect with their culture and people in ways they didn’t know. Hollywood needs to take any opportunity to bring diversity into the media. When cultures are spoken of or acted correctly, it can help people figure out the true aspects of their culture and fully embrace it.